– Profound despair felt about the inadequacy of the world, arising from comparison of the actual state of the world with an ideal state.

Born in ’89 and having recently turned 30, the members of X Raiders have come to the painful realisation that their student years of staying up all night drinking Schultenbräu and listening to Turbonegro are over. Too young to fully accept their back-pains and burn-outs, but too old to be satisfied playing freemium games and posting selfies. All of this gives rise to concerns. Concerns that are addressed on the band’s second full-length Weltschmerz ’89.

“You may conclude that the world is not a very nice place, but we would like to think the world just needs a little bit more rock’n’roll and people doing what they love. We’re still junkies for high energy rock’n’roll. The best thing about a Saturday night is playing a crazy rock show with your friends, leaving people feeling confused and slightly destructive, in a good way.”
–  X Raiders vocalist Daniel

With their excellent live reputation which brought them to festivals like FortaRock, the five-piece joined up with Grammy-nominated producer Attie Bauw (Judas Priest, Scorpions, De Staat) and holed up at the legendary Wisseloord Studios to record everything live. The result is an overwhelming eleven-track rollercoaster; aggressive and dark, yet more genuine and addictive than ever.

“When I saw the band play at a festival, I knew I had to capture their explosive energy performing live in the studio. It’s the only way to preserve their spontaneity and power. With distance they are the loudest band I ever recorded, and believe me, I’ve recorded many.”
– Producer Attie Bauw

Weltschmerz ’89 is an in-your-face collection of pure rock-‘n’-roll, plus a very personal account of all the things life throws at you. Combining a multitude of influences from Turbonegro and Iron Maiden to early-Soilwork and Dillinger Escape Plan. With cover art by Plack Blague’s daddy of hypermasculine erotica, Butch Dick (www.butchdick.com), the band suggests the quick fix to your Weltschmerz: Fuck those tears, grab your leather jacket, and walk your boots straight through that door. 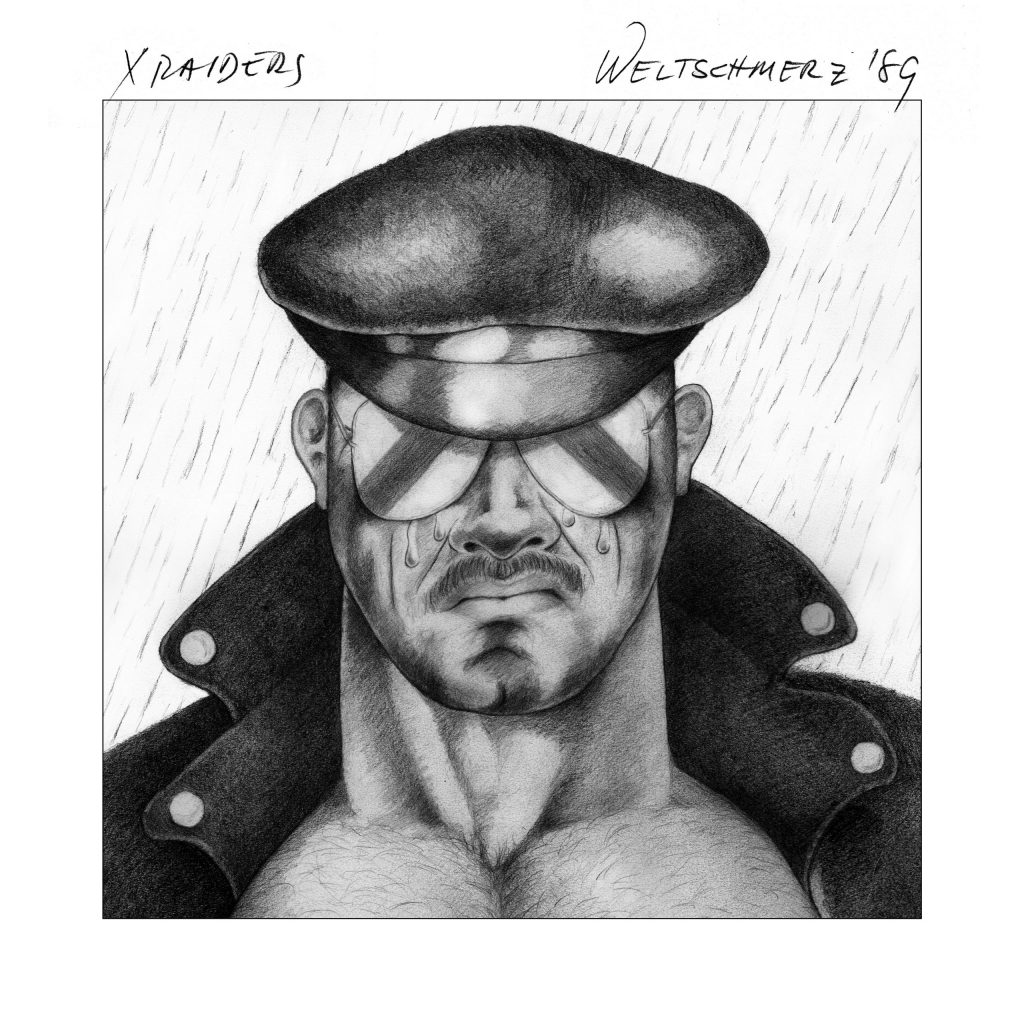 “Album of the month”

“X Raiders have the highest good in their genre: authenticity.

“The passionate canned-beer drinkers have recorded eleven high-energy grenades, which should make their audiences rapturous”

“With “Wasted” […] X Raiders have written a genuine hit-song!”

“If there is any justice in this world, we’ll definitely be hearing a lot from X Raiders. Bring on that new record!”

“These boys only know one gear: the highest. Hetero, homo, bi or trans; after a set like this, you can’t but fall in love with these men.”